A few years back I was able to apply this methodology to a new and emerging industry. I found a company that was an early movers in a new industry, invested heavily in R&D was able to scale up products that were well accepted by consumers.

They not only became the low-cost producers but also had a product that economical, durable and easy to use.

Here’s a summary of some of the important data: 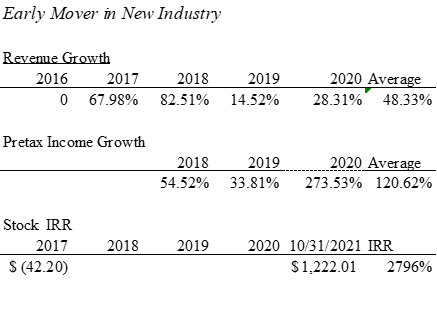 The company’s name is Tesla Inc.

When I attended Harvard University I had many excellent professors, and I learned many important concepts that dramatically changed the way I think and effected my life. One of my favorite professors at Harvard was Ph.D. economist Bob Wayland. Professor Wayland taught a course that he designed. What he taught in that course cannot be learned anywhere except on the campus of Harvard University. The class was called Economics of Business. This class was based on economic concepts and how they can be practically applied to both your personal and business life.

One of the important journal articles that we reviewed was called Firm Survival and Evolution of the Oligopoly by Stephen Kepler. This article spelled out clearly how to find and analyze companies and select those that would grow and prosper in the coming decades.

The concepts that I learned from this article are fairly straightforward but often overlooked when valuing or investing in businesses.

This article applies the evolutionary approach to businesses. The basic economic concept was that companies that have an early start in an industry invest heavily in Research and Development “R&D”. This research increases productivity and enables the companies to lower costs and earn more money. As they earn more money, they can then invest more in R&D. At some point every company hits some type of hazard, however the companies with the lower cost and higher profits will be able to survive those hazards, unlike some of the later entries into an industry.

In order to prove his thesis, Kepler researched several industries including, automobile companies, tire companies and penicillin companies. What his research showed was that the early entries into the new industry who invested in R&D were the ones that were able to survive in the coming decades.

I found the most interesting to be the analysis of the automobile industry which started in 1895. By 1907 there were 82 companies operating in the automobile industry. That number eventually increased to an overall peak of 271 companies in 1909. However, in the Great Depression it was reduced to 30 and by 1966 only 10 were left. Currently there are only two or three; Ford, General Motors and Chrysler, though Chrysler may not technically still exist.

The economic analysis is fairly straightforward in that early companies in the industry such as Ford, General Motors and Chrysler were able to invest in R&D that enabled them to make cars cheaper, more efficient and more affordable. This created a self-repeating cycle - make better quality cars faster and cheaper and sell them for a larger profit.

This meant when things were tough during the Great Depression all three survived. Many of the others fell by the wayside because they did not have enough capital to survive.

This same concept can be applied to companies that started in the late 1990s such as Google, Facebook and Amazon. By applying the same concepts, you can see that many of the technology companies went by the wayside, but these companies still continue to dominate because they invest and spend wisely in R&D. The results of this R&D are clearly evident in their lower costs, profitability and better products than any of the new entrants.

These companies built what is called an economic moat by Warren Buffett. However, what Warren Buffett did not realize was mainly built by effectively using R&D and lowering cost. When you produce products or services at a lower cost, competition is unable to effectively compete because you can outspend them in any way you need to.

The other journal article that I found particularly interesting was Uncertainty, Evolution and the Economic Theory by Armen A. Alchian.

Alchian applies theories of evolution to businesses. His primary theme is that “economic counterpart of genetic heredity, mutations and natural selections are imitation, innovation and positive profits.”

The essential concept is that success is based on results not motivation. For example, in 2019 many companies prepared budgets, projections and had detailed plans for 2020. However, once COVID-19 swept the globe those plans became useless. Companies that prospered during this time did not do so because they had plans or contingencies; they were successful because they were lucky. Companies like Amazon who had a business model that relied mainly on people ordering products “from home” were able to thrive and grow in this new unforeseen environment.

Some of the key concepts that can be applied from both of these articles Firm Survival and Evolution of the Oligopoly and Uncertainty, Evolution and the Economic Theory.

A few years ago I was able to apply this to in a new and emerging industry. I was able to find a company that was one of the early movers, invested heavily in R&D was able to scale up products that was well accepted by consumers.

They not only became the low cost producers but also had a product that economical, adorable and easy to use.

Some of the concepts I have learned in this class can be seen in the earlier video that explains how to make over $5 million by simply investing in low-cost index funds that are in tax advantage vehicles.

for your Litigation, Business Valuations and Tax Needs.